“When will we have mechanical servants who can be programmed to do household chores automatically? Most computer experts think it may take another 50 years or more to develop robots with this much skill and intelligence. But the experts may be wrong. In basements and garages all across the country, amateur robot-makers are hard at work. They’re turning odd assortments of tin cans, computers, car batteries, and plastic domes into intelligent machines – robots that can speak, understand words, and find their way around the house. These home-made robots may speed the development of machines that are skillful enough to work around the house and smart enough to act as nursemaids or companions. Before we know it, all of us may be living with machines that minds of their own.” 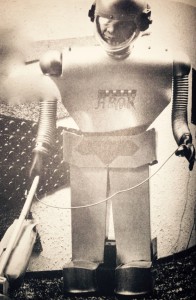 Even though only 10 million autonomous roomba cleaning units have been sold since 2002, the day every household has a robot is not far off. According to experts from the Nomura Research Institute, nearly half the jobs performed by humans could be replaced by robots within a decade. Nowhere is this more evident than at Nagasaki’s Henn-na Hotel, a hotel run entirely by robots. Weird? Nah, it’s Japan!

As predicted by futurist Ray Kurzweil, the singularity will occur around the year 2045. At this point, digital transistors will have the name computational abilities as biological neurons, not only matching them in storage but outpacing them in speed as well. The next natural step then will be to “upload” consciousness to a mechanical housing. Robots and humans will merge to form a new species, which will essentially allow this new quasi-human to live forever (if you can afford it). Consider the implications on financial systems, space exploration and religion, to mention just a few.  Different constructs will need to be fabricated to support this new paradigm.